You are here: Home1 / Art Basel

The annual Art Basel Miami art fair weekend has now kicked off, and the celebrities, creatives, and fashionistas have been spotted roaming the streets and filling up the “it” venues all over South Beach.  Maybe you just don’t like art all that much, or maybe you’re just not in the market to write six-figure checks for contemporary art pieces… but rest assured, there are plenty of fabulous events around town to party like Leo and the boys this weekend, if you’ve got a bit of spare change lying around in your couch cushions.

Here are our picks for the can’t-miss scenes on the Art Basel Weekend canvas, along with links to presale tickets and tables purchase: 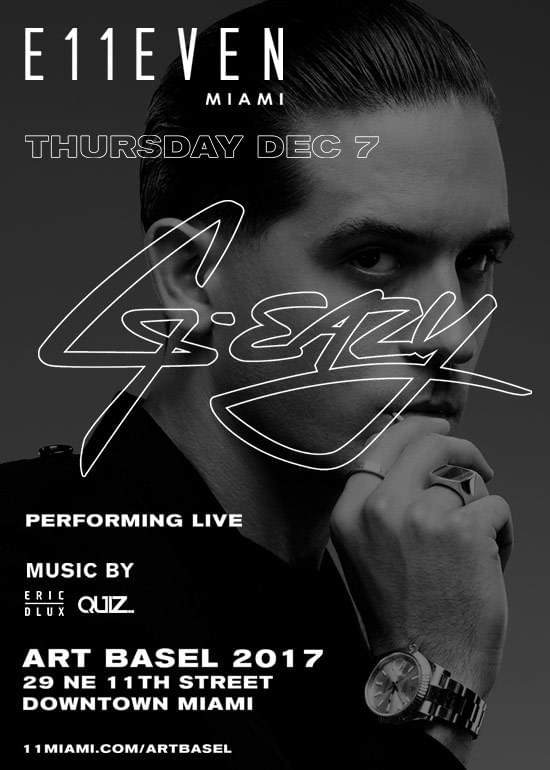 Partygoers & art aficionados from around the globe can “EXPER11ENCE THE ART OF NIGHTLIFE” at E11even all week.  On Thursday night, the hybrid dance club/gentlemen’s club venue pairs a live performance from Oakland’s hottest rapper and mainstream crossover sensation G-Eazy with world-class cirque-style theatrics featuring aerialists, acrobats, and contortionists.  Miami’s only 24/7 nightlife destination is sure to be packed with celebrities and models this evening as Art Basel kicks into high gear. 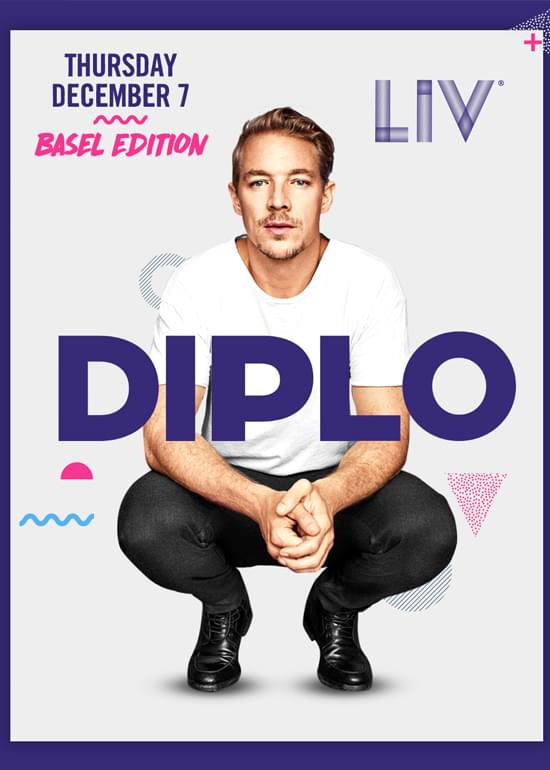 On Monday evening this week, Diplo, the musician and producer, stood on the back terrace overlooking Biscayne Bay with Jeremy Scott, the noted fashion designer. Long candlelit white tables had been set for dinner. “I just bought a bunch of land in Jamaica, and I’m going to turn it into a creative commune,” he said.  Diplo hit the art fair early Tuesday morning to browse pieces for his estate, despite a 2 a.m. D.J. gig in a parking lot in downtown Miami with his pal Virgil Abloh, the designer of the fashion brand Off-White.  On Thursday night, the 2017 Wynn Las Vegas resident DJ headlines South Beach’s most well-known and longest-running upscale nightclub, which figures to be one the hardest-to-score nightlife tickets of the entire Art Basel weekend.  All in a week’s work for one of electronic dance music’s brightest stars. 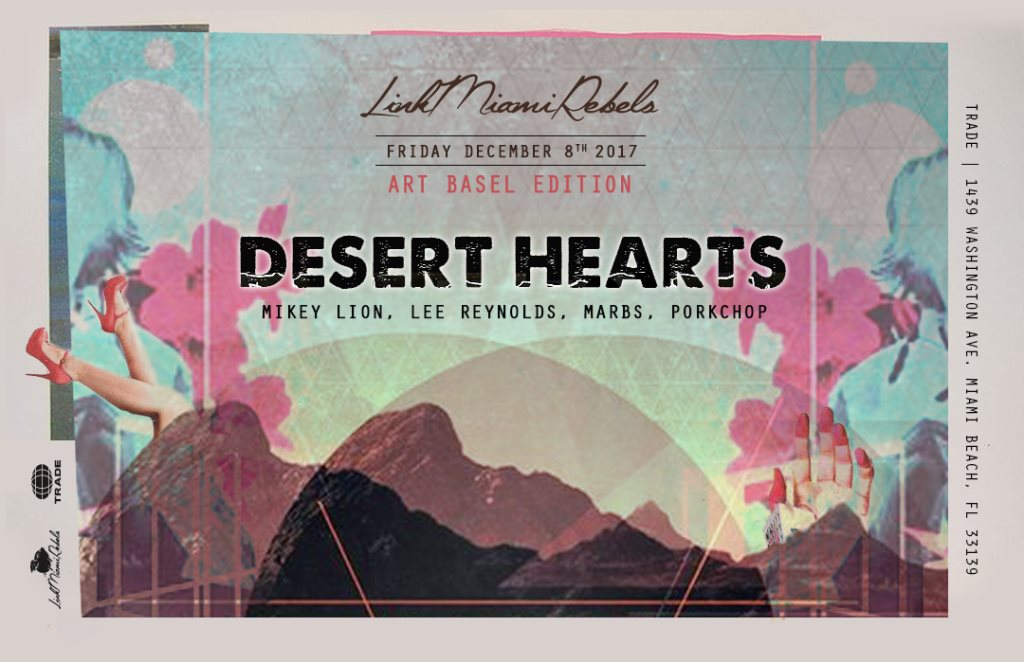 Contemporary art trends may go out of style quickly, but House, Techno, & Love most certainly do not. The Desert Hearts City Hearts Tour has timed its Miami tour stop with Art Basel weekend, and their event at no-frills locals’ favorite Trade – co-hosted by locals’ favorite promoters Link Miami Rebels – will serve as a showcase for their newer music coming out on Desert Hearts Records in 2018. With momentum still riding from their summer Desert Hearts Festival and November City Hearts Festival in Los Angeles, this crew is pouring everything into their record label to take their love vibe to the far reaches of the world. Their launch into the far reaches of the galaxy begins Friday in Miami, and where better to make some memorable magic than in Magic City itself? 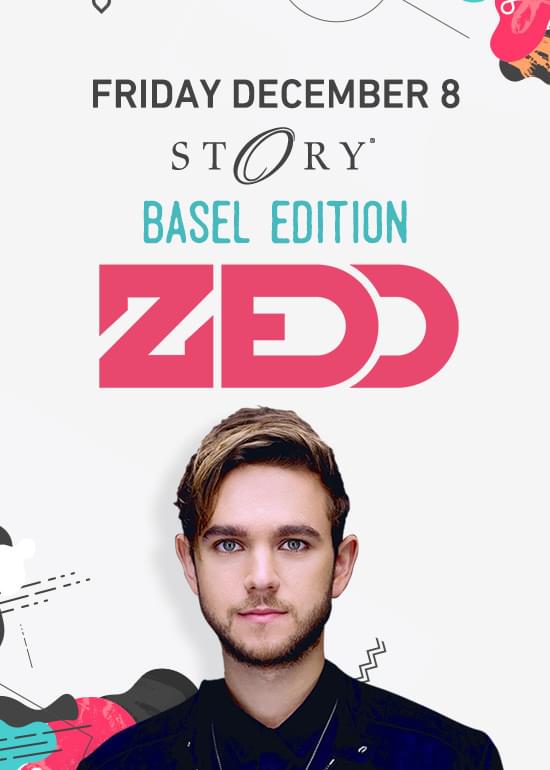 Zedd, the DJ/producer who landed on this month’s December 2017 cover of Forbes Magazine, has a backstory that many contemporary art fans and Art Basel attendees can appreciate.   To distinguish himself from competing DJs with similar sounds, he created a graphics-heavy live show that feels like watching a video game projected onto a movie screen, with a custom visual for each song.   A cable runs from his computer to the front of the house, where a team of technicians makes sure everything synchs up, including the program’s lasers and pyrotechnics.  Early on he became known as the anti-DJ of the DJ universe, which ironically (hey, artists love that irony!) led him to surging popularity, longstanding Vegas residencies, mainstream radio success, and collaborations with megastars such as Lady Gaga, Justin Bieber, and Alessia Cara.

Art Basel Showcase @ Do Not Sit on the Furniture 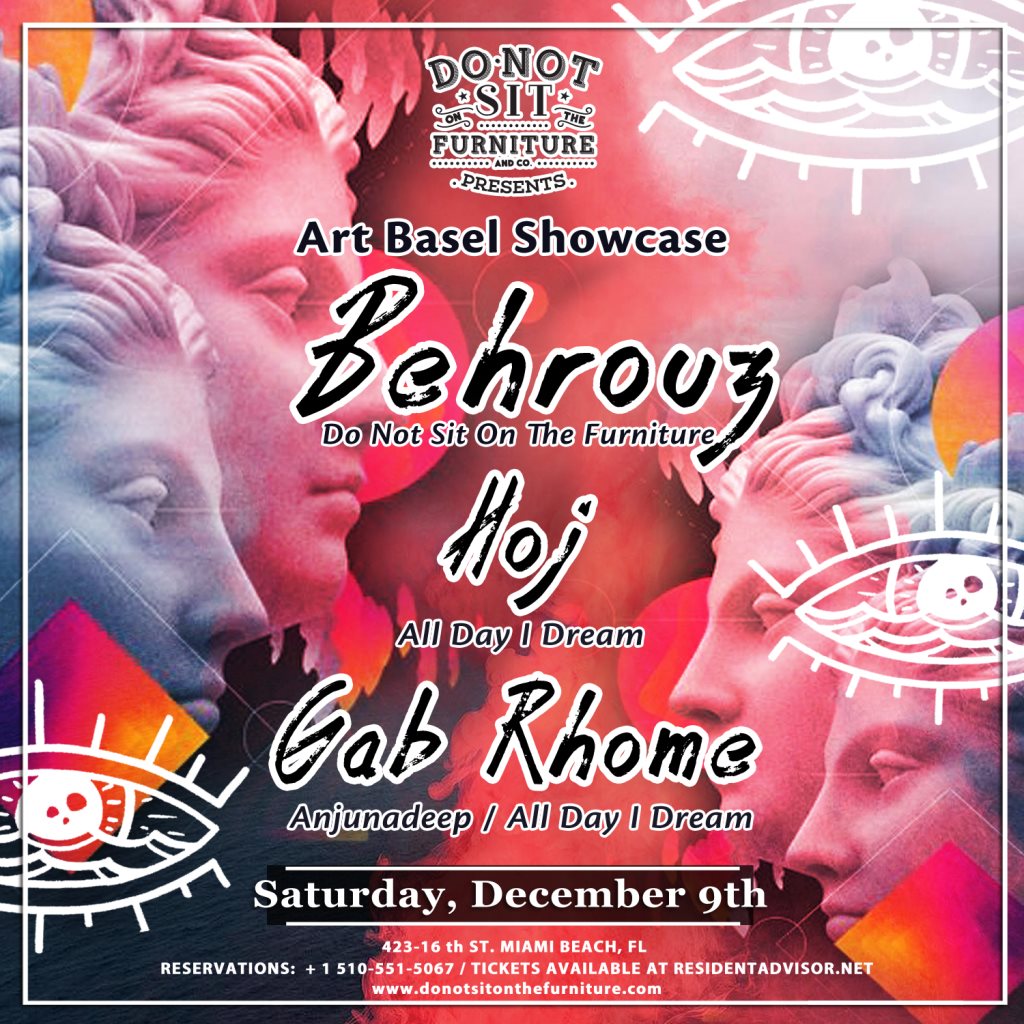 The Playroom crew from NYC descends upon Miami to host a special Art Basel event featuring Behrouz and friends.  Playroom serves as a liaison between many artists & DJs, club/ venue owners, event and festival producers, and a niche crowd of sophisticated house and tech house music enthusiasts.  Its focus is on cutting edge music, the quality people that comprise the magnetic community associated with it, and the positive vibe that it creates.  Behrouz’s Art Basel sets have become legendary over the years, and this industry insiders’ party is sure to be a fabulous networking event as well as a colorful foray into the emotional and artistic journey of electronic sound. 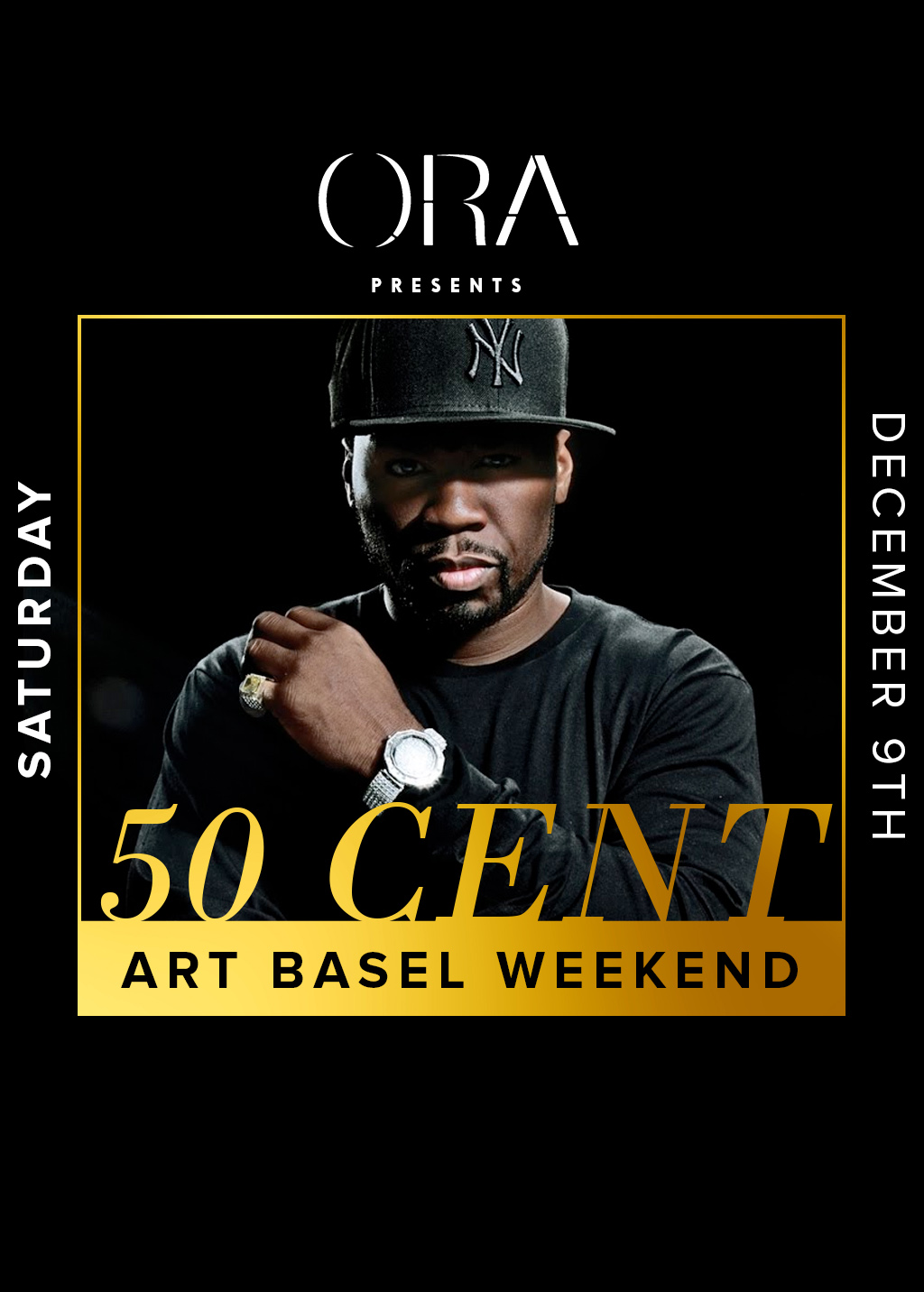 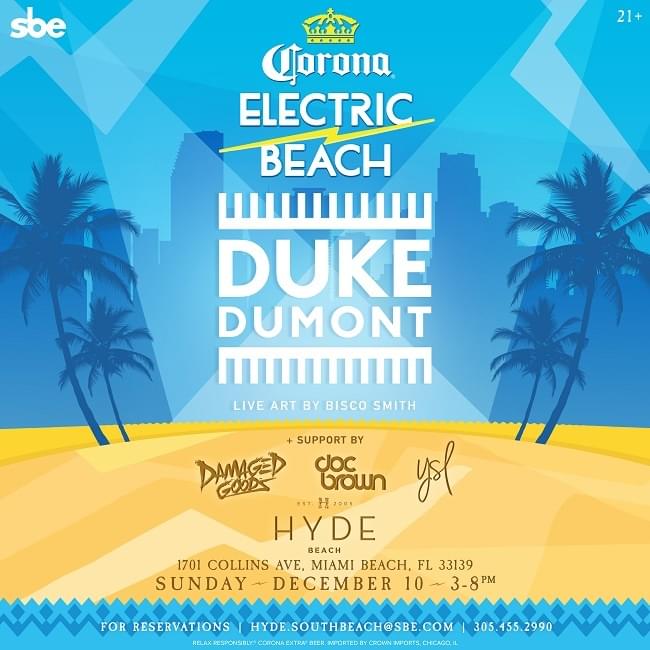 Corona Electric Beach is a popular traveling “fun in the sun” experience featuring world-renowned DJs, and for Art Basel weekend on South Beach it will feature electronic artist Duke Dumont, who has played one of the most pivotal roles in making UK deep house the thundering global juggernaut it is today.  The British superstar will not be the only draw for SLS Hotel’s famous Sunday party, as Bisco Smith will be hosting and presenting a unique live art installation.  Bisco is a contemporary visual artist from Queens, New York with roots in music, graffiti, and street art.   Bisco works in a variety of formats, including canvas and large outdoor murals, and is known for his “visual freestyle”—characterized as a blend of graffiti deconstruction, gestural abstraction, and lyric-based stylewriting. Made predominantly with a black and white color palette, his art visually captures the rhythms of music and the energy of the moment through its spontaneous marks and abstracted text. 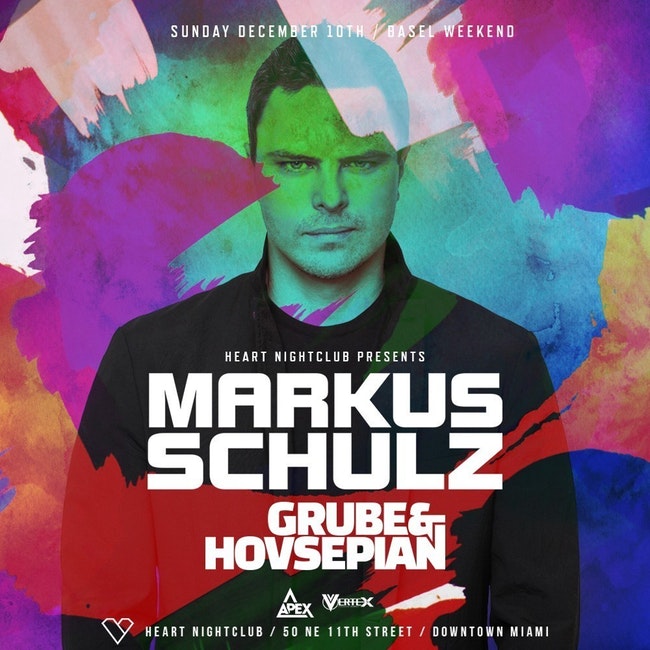 Art Basel weekend closes out with a global trance music legend putting on a thunderous spectacle in his own hometown.   Miami Heat superfan Markus Schulz – known for his marathon 10-12 hour DJ sets – waves goodbye to the visiting artists and creatives and hands the city back to the home team with a pulsating DJ set that surely will not end until after the sun comes up.  In true Basel fashion, expect to see an artist tinkering with works in progress while still producing high-level performance pieces, as Mr. Schulz gets some warm-up reps in advance of his forthcoming New Year’s Eve open-to-close extravaganza at the renowned Avalon nightclub in Los Angeles.

More events and more venues for Art Basel Weekend 2017 in Miami can be found on the Discotech app.